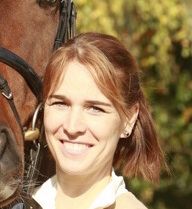 Success in dressage competions up to Grand Prix level, a special feeling with horses and the passion to convey the connection into riding sport, all played a factor when Katrin Meyer accomplished her masters in Pferdewirtschaft and was awarded the prestigious Stensbeck medal for outstanding results.

Raised in Switzerland, it was Katrin's Grandfather, Thomas Hürlimann, who encouraged and promoted the the love of horses to his granddaughter. In earlier years, he was a member of the Swiss cavallery and would often take Katrin along with him to the stables. Her sport oriented ambitions began to grow - before the age of 15 she successfully competed in dressage, jumping, swimming and running competitions. Later it was very clear to Katrin that she wanted to become a professional rider.

Katrin began her apprenticeship with Hans Staub, who has been the Swiss Champion several times and has represented Switzerland successfully at Grand Prix Niveau. His stable in Bäretswil is where she completed her education as a rider. Prior to 2001, when she completed her masters with the Stensbeck medal of excellence at the Westfalen Riding and Driving school with Michael Putz, she expanded her knowledge and honed skills with renowned trainers: With the U.S. team trainer Klaus Balkenhol, who himself was team gold medalist at the olympics, she prepared herself for her masters exams and worked in his stable as rider. Afterwards she spent quite some time with Michael Deters in Regensburg, who was a student of the legendary Herbert Rehbein, then continued to refine her skills with Karin Rehbein at the traditional Stud Grönwohldhof. At this time she was successful up to S level. She also had intensive jumping trainings with Hanno Vreden, the director of the Riding and Driving School in Rheinland and also in the Competition stable from Gilbert Böckmann in Lastrup.

After the completion of her education she moved on to work independantly for the Breeding farm Schulze Tophoff, this is also when she began to fly on a regular basis to the USA to teach. She also traveled throughout Germany to teach students up to Grand Prix level. She then travelled to Chile where she stayed for three years at the Tejas-Verdes dressage facility. At Mario Vargas, the many time Chilean Dressage champion and Pan American Games competitor, she took charge of training of horses and riders and brought them to the highest standards. While in Chile, she integrated a development program, through the FEI and the International Riding Sport Club, for the south american countries like Uruguay, Trinidad, Barbados and Argentina. There she taught clinics in both english and spanish.

Since then Katrin Meyer is now self-employed in Rheinland and is based primarily the the Riding Center Verlacher Hof in Hilden - the same center where Klaus Balkenhol had trained. This is where she teaches and develops motivated riders and horses of all training levels. Her goals are very clear and defined: Professional training using classical training methods to create harmony between horse and rider. 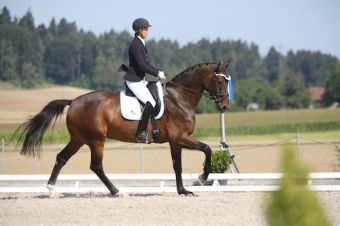 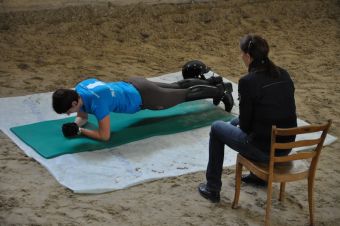 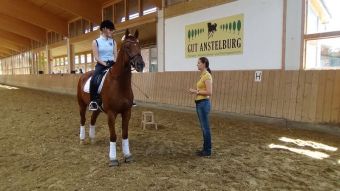 Training for horse and rider in german, english and spanisch